If you run a business, you know that your presence on social media is essential for staying relevant and engaging with your audience. This year, in particular, businesses have had to lean into their digital marketing strategies - and Twitter has been an invaluable tool throughout the process.

However, Twitter does not come with an instruction manual, which means you could be making critical mistakes.

Some Twitter mistakes are more serious than others, such as spamming your timeline or following too many people, which means some are worse than others. In this blog post, we'll go over five of the most common Twitter mistakes businesses might make so you can avoid them in 2023.

You might be wondering what these mistakes on Twitter might be referring to. As a social media marketer, I have observed a few common mistakes, or if I put it in another way, a few Twitter blunders that many people and businesses make.

These common mistakes should be avoided at all costs if you wish to be one of the best or top Twitter accounts.

Even if you are a small business or a large enterprise, a social media manager, or just a Twitter user, make sure to avoid making such blunders. This is important as your followers on Twitter should not view your Twitter handle to be unprofessional.

When you include someone's username in a tweet, they receive a notification that you mentioned them. If they react, a Twitter thread for the dialogue is started. Simple and elegant.

However, it becomes more difficult if you start your tweet with a username. Only users who follow you and the indicated account will see the tweet in their timeline in this case. Furthermore, when you browse your profile, the tweet will appear exclusively in the Tweets & replies section rather than the main Twitter feed.

So make sure you are not starting a tweet by mentioning a Twitter profile but rather with text that provides value to your followers or something that they may find interesting. That way, you have a higher chance of getting retweeted!

Take a look at how webdew engages on Twitter in the image below: 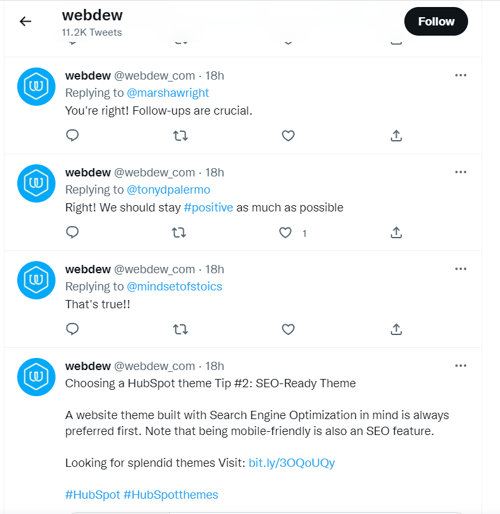 A hashtag is created on Twitter by typing the # symbol followed by a word or phrase. It enables Twitter to categorize that message, improving discoverability for individuals looking for tweets about a specific topic.

Here are a few examples of how to use hashtags wisely:

While you can use as many hashtags as you want in a single tweet, employing too many dilutes the intent; Twitter suggests no more than two hashtags in a tweet. Make sure that you do not hashtag a word that is unlikely to be searched for or is not relevant to what you are posting.

It is also crucial not to add #hashtags to random #words in #the sentence—it does not add value of the tweet and makes it more difficult to read. Also, do not use a hashtag just because it is trending. Understand the social media trends and use relevant hashtags only in your tweets.

Following too many people

You are on Twitter, and it is quite amazing when you get more followers. However, it is not necessary that you return the favor and follow back. Isn't that common courtesy? No, not always.

Unlike Facebook, which is centered on two-way friendships, Twitter is intended for the dissemination of ideas. It works best if you only follow people you're interested in, then make a point of reading their tweets. Don't feel bad if you don't follow someone back. 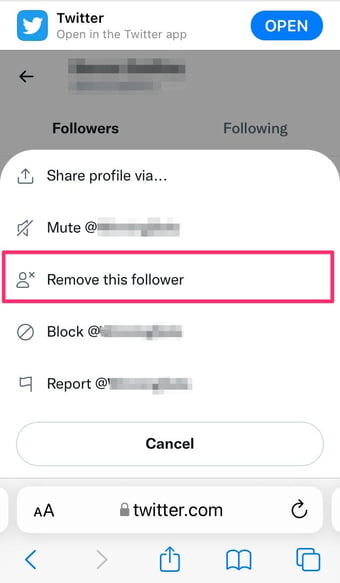 If you follow too many people, your timeline will become a chore, and you'll miss out on tweets you might have liked and must have found relevant. This also applies if you decide to follow anyone solely on the basis of a single excellent tweet or because someone retweeted you. That is not a healthy social media practice.

You might want to read more on social media marketing tips to grow your business on various social media platforms.

It's all too simple to believe that your words enthrall everyone. People have decided to follow you, but that doesn't imply they want your tweets to fill their timelines. That is a surefire way to rapidly get unfollowed.

If you're tweeting more than a handful of times a day (excluding replies), it's too much. If you have been tweeting a lot because you exceeded the character limit, that can also be a problem.

You should specifically avoid constantly retweeting yourself in order to resurface tweets that you believe did not receive enough engagement. You can stop yourself by asking if every tweet adds value and can be relevant to be retweeted.

There are many other ways to express, and Twitter is just one medium. You can choose to start a blog and share links to your field instead. That way, you can grow your blog traffic organically without committing the blunder of tweeting everything you want to share.

Have a concrete Twitter strategy and get a hold of what kind of tweets you should post, when to tweet, what to retweet, etc. Make sure you are tweeting only relevant posts and not spamming.

Twitter allows the usage of bots as long as they are not malicious. These bots are capable of automating a wide range of operations, including tweeting on your behalf. You may be tempted to put up an auto-responder that welcomes new followers or tweets to let people know when your follower count changes.

This is a terrible idea and one of the biggest mistakes you can make. People prefer to converse with you rather than with bots.

Don't bombard other people's timelines with automated tweets. Rather, make your tweets one-of-a-kind and personable; it will benefit you and everyone who follows you.

This is the age of personalized marketing, and Twitter is a platform that is in the limelight always and is well-noted. Many businesses can use it to their advantage in gaining leads, be it through direct or indirect marketing. So, avoid this big mistake, or you might see people clicking on the unfollow button.

Now that you're aware of the common mistakes on Twitter that you must avoid, you can go about improving your tweets. While Twitter does not give out prizes to its top users to be mindful of these mistakes, you would almost certainly receive one if they did. For the time being, give yourself a pat on the back.

With all of these mistakes out of the way, you'll quickly create a great Twitter reputation, which means more people will follow you, and you'll gain respect within your communities.

So, buckle up to gain momentum on Twitter, but keep these mistakes in mind, ALWAYS!

Wait, are you still in the dark about making proper social media strategies or need a hand with business marketing? Find more blogs and resources on www.webdew.com or simply get in touch with us.

A major advantage of using Twitter for business is the ease with which you may share content and initiate dialogue with your target market. That audience will then hopefully retweet and otherwise spread the word about your content and tweets.

10 mistakes to avoid while creating a whiteboard animation video

Mistakes in content marketing that can cause huge barrier in 2022