Things to keep in mind while making character poses for animation

Working with characters is a big game now. Animated characters are used widely and very popular in today's graphic requirements, be it an ad on the internet or simple carousels, posters, banners, and most importantly, in explainer videos.

Animated videos are rising and are setting a new trend in this era of advertising and marketing through videos. Many businesses leverage explainer videos with animated characters to explain their product or service.

In these animated videos, one of the first steps is to make a storyboard. The storyboards are a series of continuous and relative visuals, created in alignment or according to the scripts, that form into a story in Adobe Illustrator. After the storyboard is ready, you can animate them in After Effects. Sometimes when you make a character in a continuous story in these visuals, you will need a character in different poses.

If you are a designer and working on a storyboard for an animated video, there are chances that you are facing difficulties during character making. It would be best if you had a character in different poses like standing, sitting, back pose, side pose, and so on, so that you can use it to show any situation.

Online resources are limited with their character poses. You can find many characters but not the same character with the different poses. There is only one way to design them, and that is with your design tools, which can be challenging at times. However, it is not as hard to design these poses of characters.

Take a simple character standing facing front from any vector file. You can download it from any source, such as Freepik or Vecteezy. I have taken a character from the website stroryset.com.

Let's dive into designing a character with different poses.

Take a look at this image below. It shows the character I chose facing you. Here As the character's front view is what is seen to you, this pose is called a front pose. 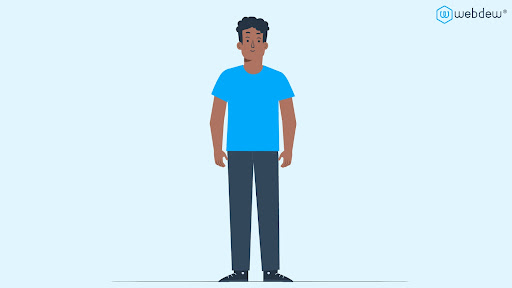 In this front view, mostly the character looks straight at you, and all the features of the character, such as hands, face, etc., are shown clearly.

In the side pose, you will be able to see how the character's side proportions are proportioned. Let's take a look at some of the aspects you would have to make while developing a side view of a character.

In the side pose of a character, there are two possible positions. One is appropriately gazing to the left or right, and the other is some figure moving into the front, as depicted in the image below. The character is shown in two different stances when he turns to the left in this image. 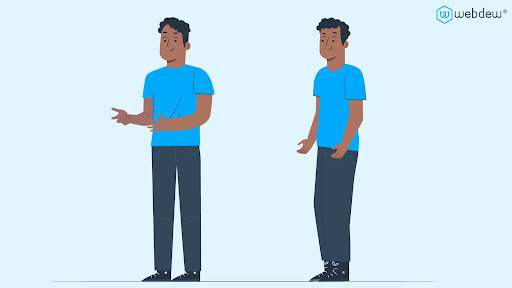 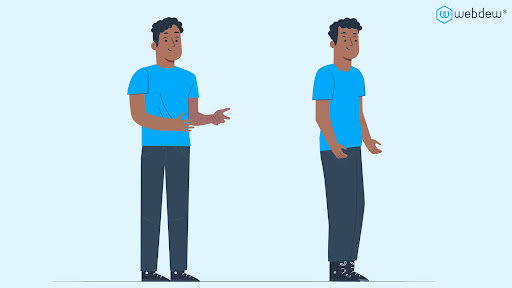 If you take a closer look at the character's posture, there are certain key aspects to bear in mind.

Sometimes you might need characters to show that the character is focusing on the things you are, that is, the character and you are facing the same direction.

Here again, we have two poses of the character in the back pose 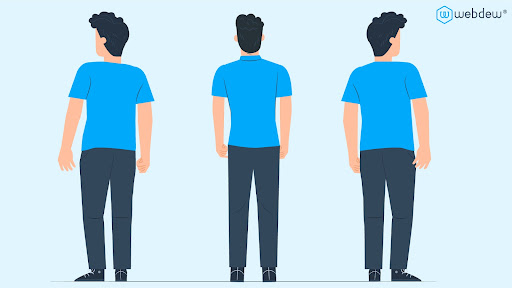 Here I have some points for you to keep in mind while you are designing the back pose of your characters.

When developing the turn around back position, keep the following points in mind:

When developing the straight back position, the following should be considered:

When working as a designer, you must always improve your illustration skills. In addition, this form of a lesson or, to put it another way, a rapid study of the illustrations will give you more confidence in your design skills as you learn more about illustration creation.

A majority of designers are concerned that they would be unable to show the character or any other views of any representation of this nature. These are just the basic and simple poses. There are even more poses that designers create, which include the character doing many things facing various directions.

It is, of course, a time-consuming job as character making requires a detailed eye. It can be, however, used in various types of videos, including 2D animation, explainer videos, etc.

In webdew, we have a team of skilled designers who understand character illustrations and have made several videos. If you are looking to make character animation videos for your product or service, webdew is where you can find assistance. Visit our website www.webdew.com or contact us to know more.

How to use character animation after effects like a professional?