The animation is considered as one of the powerful tools to express and communicate new ideas and information. Artists add life to the animated characters with the help of some of the basic principles such as timing, stretch, anticipation, precise staging, and many more.

It is challenging to master the skill of character animation and involves years of practice and continuous learning to get where you want to be.

It is present in one form or the other in movies, television shows, cartoons, advertisements, etc. In fact, the global animation market is expected to grow by 270 billion by the end of 2020. 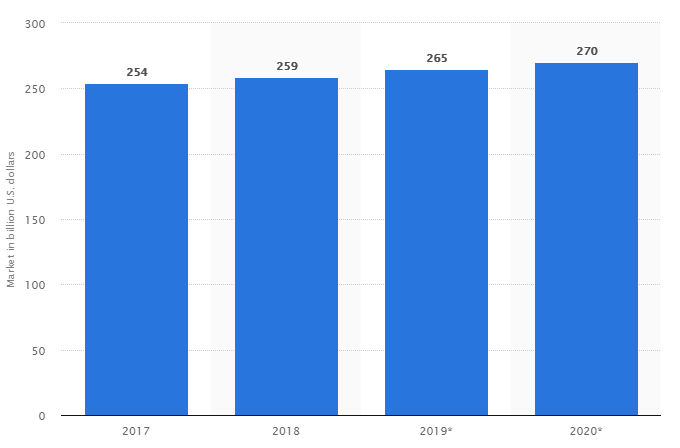 As an animator, you need to be aware of the latest industry trends to be at your best and stay ahead of your competitors.

So, how do you strengthen your character animation videos?

We have put together a list of essential tips which will help you to strengthen and add life to the animated cartoon characters.

According to the legendary philosopher Aristotle, every action has primarily two natural causes, “Thoughts,” and “Character.”

Similarly, the renowned animator Walt Disney once said that behind every action there is at least one or all the mentioned driving force, attitude, mood, and personality.

Hence, we need to understand how the characters think? What do they need? What are their intentions?

Facial Expressions are an important part of any character animation videos. However, it can be very tricky as most of the expressions occur very fast and we capture them naturally without being aware of it.

When facial expressions are added, the character becomes much more realistic which improves its overall appeal to the audience.

For example, most of the production companies record their actors doing voice-overs. While creating the characters, the animators watch them back which helps them in adding the appropriate expressions to the animation cartoon character.

If you are a young start-up or a small business and can’t afford actors, just ask a friend to perform the part and capture the character animation video using a smartphone. This will make your work easier while doing animation work.

2. Basic Model and Rhythm in animation

When you use a high-resolution model, the power and memory consumed by the system are too much which can slow down the animation process. Therefore, while working on a character, you can use a basic proxy model.

After the completion of the movement of the character, return back to the complex model to process it later.

You need to have a good sense of natural movement flow and rhythm. Most of the amateur animators are either too fast or slow. Have proper timing and spacing between the frames to create movement in the animation.

With experience, you would get a better idea about the number of frames required for moving an object from one place to the other. You can show the character animation templates as a reference to your director or producer and let them know what you are thinking and planning. It allows them to give you notes on how you can improve the video further.

With the help of blocking you can have a visual representation of your animation. Lay down your breakdowns and key processes in a stepped mode to a visual idea of the final product. 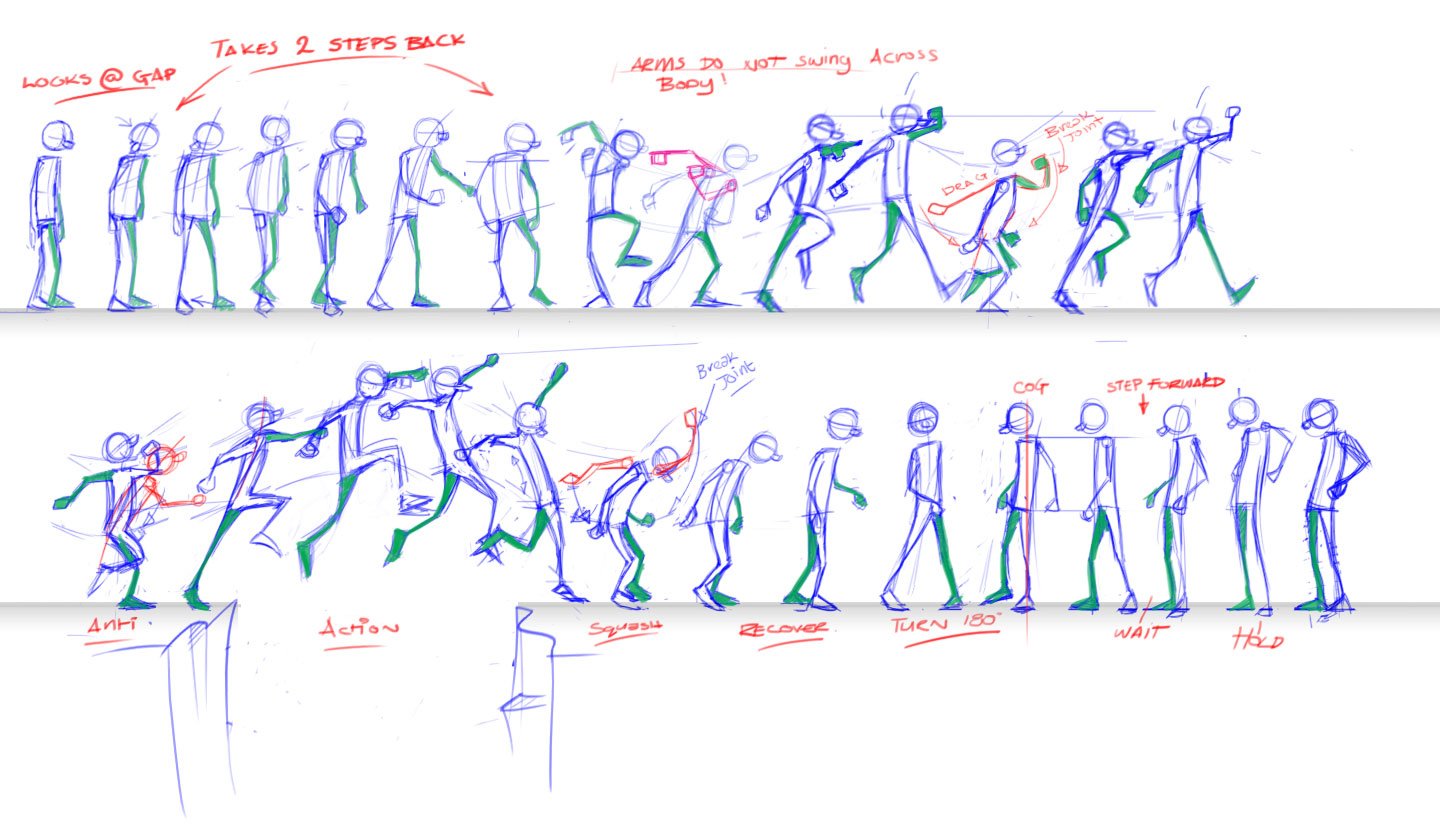 It will help your customers and clients to review the animation and show something which can easily be modified without spending more time on making the animation as smooth as possible.

Another important animation principle is “exaggeration.” It helps much more than just duplicating reality. 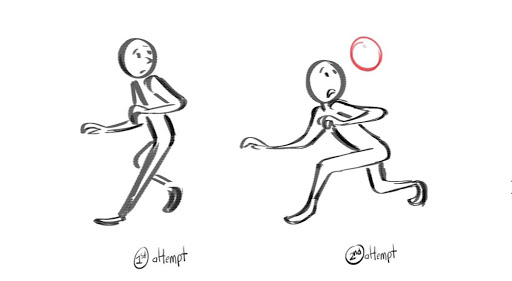 For example, copying a simple human walk can seem dull, but a little exaggeration will give a certain style and life to the character.

According to the book “The Illusion of Life” by Frank Thomas and Ollie Johnston:

An animator can imitate life by allowing what and how to show. They can exaggerate the personality of the characters to make them perform according to what the audience wants from them.

Solid drawing makes sure that the characters are in a three-dimensional form and not in 2D character animation. For example, look at the designs created by Robert Kopecky for Proscenium.

The audience only remembers the characters that are interesting and real. The characters should have a charismatic aspect which makes them different from others. 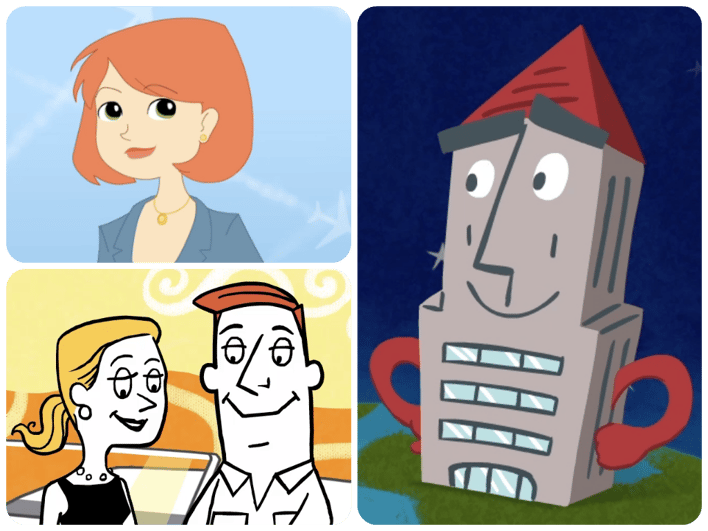 Make the characters attractive enough as it is difficult to measure or quantify appeal. Use different portions or shapes, maintain the balance between simplicity and exaggeration.

5. Ease in, Ease Out & Secondary Action

While riding a bike, you don’t directly get to 70 km/h. It takes some time to accelerate and reach that number. In animation, this process is known as Ease Out.

Similarly, when you apply the brakes, the bike does not stop right away. It decelerates for a few seconds before it halts completely. In animation, this process is known as Ease In.

When you control the speed of the objects, it creates an animation which is more likely to be believed by the audience.

For example, take a look at the animation by Tworkz. You can see a girl who is raising her hand slowly, but the speed increases after reaching a certain height.

This ease in and out method makes the animation more realistic and believable. Also, while working with the motion of a 2D animation, you can use a simple proxy model to adjust the settings instead of a high-resolution model to make the process easy.

Similarly, secondary actions add dimension to character animation and support the main action. It enhances the personality of the character and provides insight into what it is thinking.


In the above example of DeerPro, you can see that a deer eats a leaf. When it realizes the leaf is not good, the deer spits out which is its primary action.

If you observe carefully, you can see the secondary action where the deer lifts his tail which shows that he didn’t like the leave’s taste.

There are many character animation free online courses available which can help you to learn about animation at the comfort of your home.

Admiring animation is very easy, but become a skilled animator is very difficult.

You might have to spend countless hours, days or even months in forming the ideas and creating the characters for the animation videos.

Throughout the process, you need to be motivated and willing to put the required hard work.

Therefore, follow the tips mentioned above which will not only help you in strengthening but will also add life to the characters of the animation videos. The tricks that I’ve mentioned in this article will help you get started with character animation right away.

Here's how you can quickly create amazing animation character design

What is the role of animated characters in an explainer video?