A complete guide on how to use pathfinder in illustrator

Illustrator is a vector-based software that allows you to make different shapes, characters, objects, or an imaginary world of your own. Graphic designers like me widely use it for digital and printed images, including character animation, charts, diagrams, graphs, logos, illustrations and videos.

Are you exploring how to improve adobe illustrator skills?  You're in the right place! In this blog, I want to share my knowledge on one of the illustrator tools, which allows us to create various vector objects with just a click.

Even though there are many ways by which you can do it, Illustrator is a diverse software. But, if your expertise includes this tool, your workflow and efficiency will undoubtedly increase.

And the tool I am talking about is the pathfinder tool in Illustrator.

Seeing the name of this tool, you may think it helps find paths. But that's not the case; this tool has no relation to finding paths!

So why did Adobe name the tool as 'pathfinder?' Well, it is still a question left unanswered.

So, for what design purposes can you use Pathfinder? The pathfinder tool in Illustrator enables you to customize various shapes in a simple and clean manner.

If you are familiar with Illustrator, you may have played with the pathfinder palette once in a while.

To many people, the pathfinder tool seems confusing, and they tend to go for a hit and trial method by clicking all the options available to get results rather than understanding the basics of this tool. This is why people sometimes avoid it and go with other options in Illustrator.

How can you open Pathfinder?

Go to the Windows→pathfinder option.

Understanding and using the pathfinder tool

The pathfinder tool in Illustrator has two sub-options: 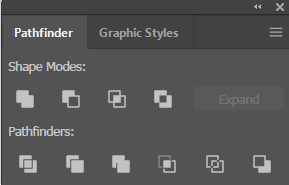 The main technical difference between both is that shape modes create new polygons of a single color, while Pathfinders break existing shapes into distinct paths using the colors of the original objects.

Let us understand the further options available in shape modes and pathfinders one by one.

The 'Unite' option, understandable by its name, unites two objects or shapes as one with the same outline. The final object or form gets the color of the object that is on top. This tool is perfect for creating complex vector forms and putting them together. 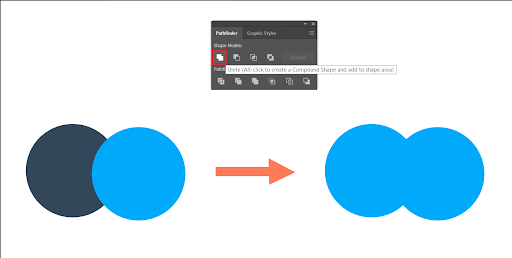 For example, take a look at the image. There are two circular objects of different colors. The blue object comes on top of the other object to unite and become a single form that acquires a full blue color. 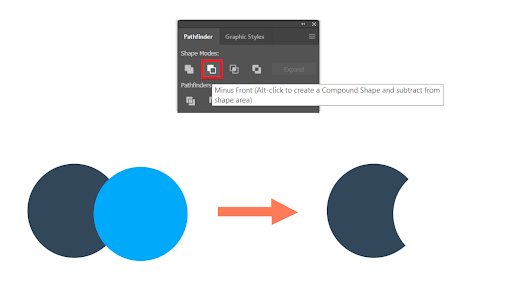 In the image, you can see that the portion that was overlapped by the blue object was removed.

Intersect traces the outline of the region that is overlapped by all of the objects. Its actions generate a new shape by displaying the overlapped portion and eliminating the top and bottom shape layers. 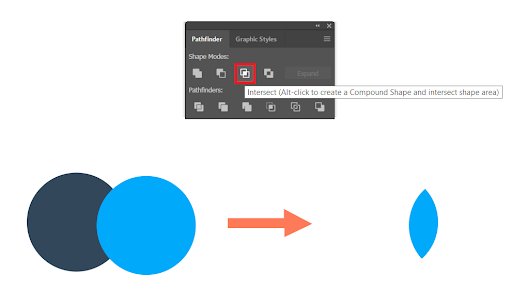 Take a look at the image; when you use the Intersect option, you can see the portion excluding the common area that was shared by the two circular objects is eliminated. You will also find that the color of the intersected portion is that of the object on top.

The name of the shape mode option says it all. The tool basically allows you to exclude the overlapped area and trace the rest of the objects together. The color of the final object gets the color of the top object like other options.

In the image, you can see that the intersected area is eliminated using the Exclude option. Moreover, you might have also noticed that the color of the whole form is the color of the object that was originally on top.

When you select the divide option, all of the overlapped regions become their own independent piece of artwork. It divides the original shapes into three layers: top, overlap, and bottom, consisting of three separate paths.

In the image, you may find some areas missing. These areas are the intersecting areas that are eliminated with the divide option.

This option only removes the hidden part of the object in the back by the object at the top. Both the objects still have their own individual colors as a result. It doesn't merge the objects with the same color and removes the strokes.

The image shows that the two shapes are separated, and the intersecting portion is trimmed off from the shape that lies at the bottom.

The Merge option also removes the hidden part of the object at the back by the object in the top like trim. But, the only difference in this option is that it merges the objects with the same color and removes the stroke, like the trim option. The difference between trim and merge is minute and confuses many designers. 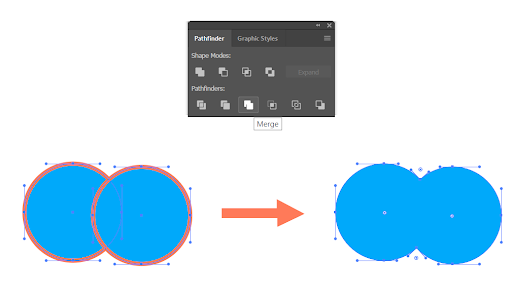 From the image, you can see that the shapes' merge' and form a single form just like it sounds. The color of the new form will be the same as the color of the shape on top.

The crop option crops the bottom object and deletes elements of the artwork that fall outside the uppermost object's boundaries. It also gets rid of the strokes.

As this option name says, it makes the objects into outlines or strokes. These outlines can then be individually selected using the Selection Tool (V) after being ungrouped with Shift+Command+G. 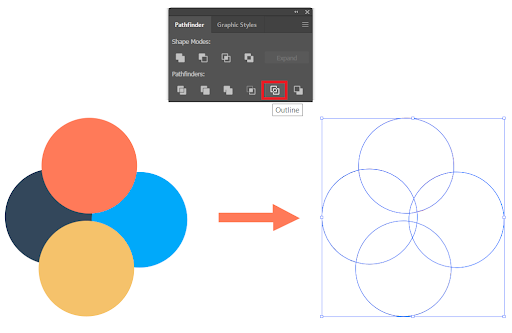 From the image, you can see that the outlines of all images are traced using the outline option.

It does the opposite of the minus front option. It subtracts the object at the top from the object in the back.

From the image, you can see that the shape below and the overlapping portion get eliminated, leaving behind the rest of the shape on top.

The Pathfinder Tool in Illustrator is ideal for making last-minute work appear simple. The tool can manipulate shapes and routes, which might help you speed up your productivity. It is critical to master the tool because it allows you to simply design complex forms.

The tool gives you complete creative flexibility and allows you to build bespoke shapes that are tailored to your specific needs. Using all of the Pathfinder tool's Effects will enable you to construct exact compound shapes.

I hope this blog gave you a good base to understand what a Pathfinder is and your options while using Adobe Illustrator. There are many other tools like the Transform tool, Pencil tool, Curvature tool, etc. that are must knows for a graphic designer.

If you have any doubts or feel like you could use some help, feel free to Contact Us!

How to use the Curvature tool in Illustrator like a pro?

How to use Trapcode Particular in After Effects: A quick guide