With a lot of videos and designs on the web day by day, graphic designers or even video production companies have to explore more things and load themselves with effective tools. To be on top of the rising competition, there is a trend of mixing old and new tools to make the most out of their designs.

There are so many effects in After Effects that can help you in video editing or making wonderful animations. If you are a motion graphics designer like me, the beam effect is one such must-know effect in after effects.

In this blog, I will help you explore how beam effects can be used.

What is the Beam Effect?

The beam effect in After Effects allows you to adjust the qualities and movement of beams such as laser beams. You can be as creative as you can be according to the purpose and needs of your design.

When you use the beam effect, you can animate the beam by specifying a start and finish point. The beam appears finest when motion blur is employed, and the shutter angle is set to 360.

The Length control determines the length of the beam as a percentage of the Time value. A setting of 100%, for example, means that the visible beam length is at its maximum while the Time control is set to 50%. Time defines the time it takes the beam to travel from beginning to end as a percentage.

How to use the beam effect?

Now that you know what the beam effect is, I will now tell you how to make beams in After Effects. These step-by-step instructions will help you create beams for your graphics, videos, and animations.

The basic idea of the beam effect in the after effects is to create a beam between two points. There are a few controls that allow you to style and display it.

Step 1: Firstly, you need to create a new composition. You can select the width and height of the composition and can also set the frame rate.

After adjusting the width, height and setting up the frame rate, select a background color and start importing the graphic files by clicking on File> Import> File. Then, select your graphic file and import it.

Step 2: By double-clicking on the project panel, you can import the graphic files by browsing them in the pop-up window.

Step 4: Once you have imported the graphic file, you need to drag the files into the timeline.

Step 6: Now, you need to select the solid layer open effects. Select it so that it will let you see the beam open. And after that, you will be able to adjust the length of graphics and icons.

Step 7: Adjust the starting and ending thickness according to your design requirements.

The Time and Length values are linked. Changing the time value will offset the beam's starting and ending points, cutting it off at those points. It can even be used as a blaster beam between the two points.

Step 8: Then, you can adjust the softness of the beam. By doing so, you can make the beam more or less blurry.

Step 9: Adjust the inside color and outside color. These are to create a glow or halo effect in the design. 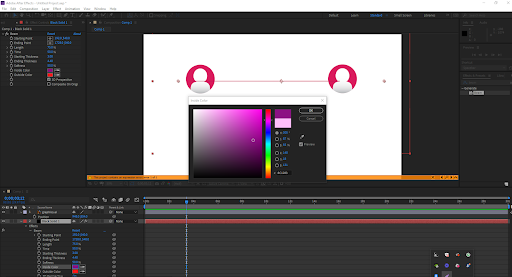 Step 10: Now, you need to select the graphic layer and press 'U' to let you see all the keyframes applied to any layer. In this case, the position keys will appear.

Step 11: Now, select the solid layer effect > beam> starting point and parenting to get the position of the graphics. 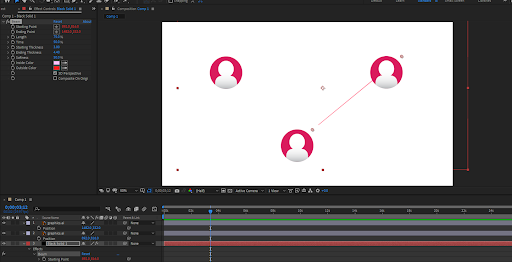 Step 12: Select from the ending point parenting to the second graphics position.

Step 13: Then wiggle in the graphics position.

In this blog, I have demonstrated to you a simple way of using the beam effect in after effects. I hope this helps you in creating beams between two points or layers.

There are many more things you can do with beam effects and other effects available in after effects to enhance your logo animation, morph shapes, etc., according to your requirements of the design.

You may also check out various other things like masking in after effects, to gain more video editing tips.

If you are looking for video editing companies or explainer video production companies, contact us! We are here to assist you with the best expertise and skilled talents.

How to use Twixtor in After Effects: A step by step guide

How to use puppet tool in After Effects: A step by step guide