Significance of performance testing for a new year's quarter

The reliable efforts of a business depend on the ability of the existing business applications to aid convenient working. It means that the applications that are kept in mind whilst designing and developing the business architecture are going to be aiding in business transformation and process reengineering.

Designing new software and applications involves fixing bugs and testing for possible glitches, which also brings into question the ability of the app to handle peak load. It is essential because most applications perform well under a regular load but crash whilst encountering a higher load.

The overall efficiency of an application can be judged only by subjecting it to the utmost levels of stress, load, peak, and endurance.

Performance testing thus assumes importance. As an umbrella testing methodology, it helps in increasing an app's responsiveness, improving the loading time, and providing any-context stability to the app.

In strategic terms, performance testing is imperative to adapt to new-age application dynamics, scale fast to meet the user's requirements, offer them ease, and surge ahead to sustain in the competition.

Let's move on to understand in detail how performance testing plays a pivotal role in business app development.

The online sales during 2020 in the beginning stages of the COVID-19 pandemic hit a new record of $270 billion, which was 36% higher than the year of 2019, according to Salesforce.

The sales made at the time also made it evident that there were several challenges that vendors and businesses faced during the holiday's sales, which included- frequent crashes on mobile applications, delayed response from the server, etc., slow loading of the app due to a heavy user load, delaying of payments & and overall difficulty in maintaining integral design and responsiveness of the application.

Different applications of performance testing can make a difference to margins earned by businesses. It allows developers to breeze through a few hurdles with ease.

Performance testing works as a testing ground to ascertain that the app is performing perfectly under various conditions and it provides a seamless experience to the user.

This is assured by varying the bandwidth, increasing the user load, and even sometimes altering the network's stability. In an instance such as this, an experienced performance tester continuously refines the process of tests and adds new tests to make the fixes consistent.

This helps in handling the unpredictable fluctuations in the app's usage, which are common during seasonal holidays or events like New Year's Eve.

Most of the effort involved is in designing the comprehensive testing strategy, which means that there needs to be an assessment of the situation and priorities need to be addressed. This ensures that the overall project is not at risk.

This would directly translate into helping to mitigate similar situations in the future. A fully-fledged testing strategy makes sure to simulate real-time user interactions and experiences, taking into consideration multiple possibilities.

Performance testing helps in identifying pages' response time under various networks in different browsers. This helps in improving processing times when there is an abundant amount of server requests.

It also helps to calculate the capacity of the system to handle simultaneous requests and software that may need to be run concurrently.

Different kinds of tests solve different goals for companies wherein they require the page speed, scalability, or the stability of the app to improve. As a class of testing, it covers multiple tests:

Automation of testing is achieved along with the help of a variety of tools that help in making the key change to making the lives of performance testers easier.

Automating performance cycles help to build code over a period as a repeatable task. Along with automated processes, it can be ensured that the individual components of the software are checked as opposed to having to check the basic conditions repeatedly.

Stress testing helps when it is run before events like tickets for a popular show or a sale like Black Friday. This can also help in during the processes of elections to ensure that your system has the capacity to endure the concurrent servers and request incoming,

There is a need to also check the endurance of applications to make sure that the application runs well at peak load. What this does is help to locate pain points in the software which can be addressed to improve the overall functioning.

This, in turn, also helps in authenticating the efficiency of the hardware to be able to run the software in question efficiently.

Testing for different reasons opens the doors of possibilities to so many other facets of software testing that get opened on a contextual basis. This is where different algorithms and formulas work hand-in-hand with raw data to create applications of quality with an extended life cycle.

Bottlenecks occur in software systems that can affect the overall performance of the system. It usually happens when there are issues with the hardware or problems with coding that inevitably decreases the output under certain loads. Some of the most common performance bottlenecks are:

Each of these bottlenecks can differ with the kind of instance that it's dealing with, and ensuring scalability, alongside quick loading times and response times, should be the goal for any application to have a successful venture.

There are other hurdles to look out for which arise situationally but are still rather relevant. An instance where the coding script is written in one environment, but the tests are done in a different environment altogether is a case where there is a disconnect.

This makes it so that the results are not able to be accurately matched and reviewed. Some on-priority backend work for e-commerce companies may require the performance tester to run a "quick test" against very different environments to test unpredictable factors.

Clients usually do not invest in having dedicated environments for testing performance. It is preferable to conduct tests for some projects in real environments as some clients simply cannot afford to lay claim to the resources necessary.

As a result, the testers often end up with very inadequate hardware for performance testing purposes.

Testing all the way

The need of the hour is not extensive experience or cutting-edge technological power; it is to be able to identify, benchmark against competitors, and consequently be able to monitor performance processes across the board.

This can be made a reality by taking the help of consultancy services, or more importantly, rethinking the strategies and avenues through which various performance testing steps go through.

This can be easily avoided when performance testing brings out the significance of the very attention to detail that often gets overlooked in smaller businesses.

If you want to employ a comprehensive performance testing team for your applications or are looking for valuable advice, Indium is here to resolve your queries: 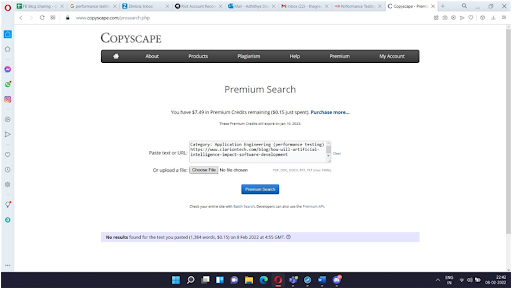 7 Ways to troubleshoot and solve performance issues with mobile apps