webdew believes in action, progress, and growth. Our case studies will help you understand what we do, how we do it, and what we can do for you.

One such project that webdew left a mark on is that of ReceiptMate. Here is our case study on making a 2D animation explainer video to promote ReceiptMate's newly developed app.

The project story began when Loic Fourniller, the founder of a mobile startup, ReceiptMate, got in touch with webdew for an animated video. The purpose of the video is to promote the newly built ReceiptMate application.

The project was completed as webdew delivered a unique 2D animation video that helped ReceiptMate convey its concept easily, boost conversions, and get more downloads.

This case study shows how webdew assisted ReceiptMate in converting their concepts into visuals and achieving their objectives economically in a short span of time.

The client, ReceiptMate, is a newly developed app that helps people digitize their loyalty cards and store receipts. They provide a safe and easy way to receive, store digitally, and organize receipts in these trying times where contactless solutions are required.

Making people know the reasons for choosing the newly created application ReceiptMate is not a cakewalk. They needed a marketing strategy that could help them gain more conversions and digital reach.

ReceiptMate has to stand out from the crowd with many apps being introduced. And it was not just about introducing the app. It was to make people understand how the app can help them, especially in a fast-growing digital world where physical touch should be cautious.

A short video can give the application an upper hand over thousands of apps that have been left forgotten on the Play Store and App Store. ReceiptMate can also utilize the video on all digital media handles for promoting the app.

The challenge was to make a short 2D animated explainer video that included all relevant and relatable visuals along with a voiceover. The voiceover should be apt for the visuals. Moreover, the video should also be appealing and eye-catching.

The main goal was to convey the ReceiptMate concept in a simple way so as to reach their target audience.

The Pathway to Results

Let us tell you how we proceeded with the challenge and found the solution.

The client directed the webdew team and gave an overview of their requirements. They also provided the script, based on which the webdew team prepared the visual illustrations or the storyboard.

The team shared the voiceover that is aligned with the video. The voice of a female North American was used for the voiceover.

The client recognized the team's best efforts, and the 2D animated explainer video was finalized as it met all the requirements as discussed on the commencement of the project.

The partners interacted daily to share progress updates and feedback throughout the project.

The 2D animated explainer video with voiceover was delivered to ReceiptMate by the webdew team meeting the requirements and deadlines. The video was about the "ReceiptApp" mobile app.

There was smooth navigation and communication from the beginning to the end of the project. There were four rounds of feedback for the overall output.

The webdew team always stays enthusiastic from the start to the end of the project as we prioritize client feedback and ensure client satisfaction.

The video satisfied the client's requirements and can be successfully titled 'amazing.'

The video was uploaded to the client's website and all of their social media profiles to help consumers learn more about the app. 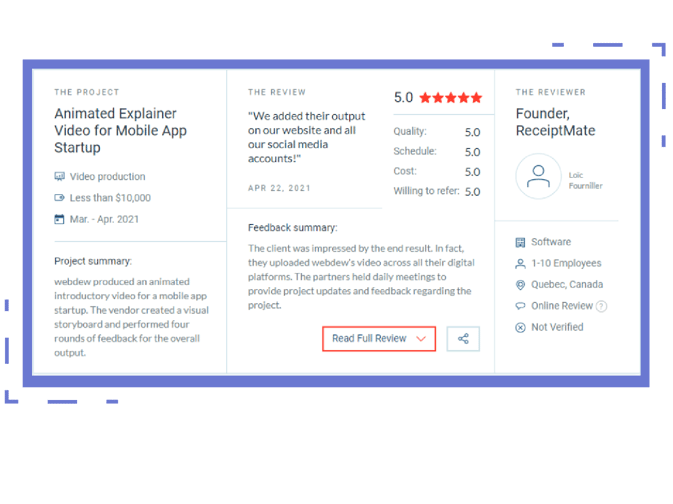 The client was pleased with the final product and shared the review on 22nd April 2021 on Clutch. They gave webdew a perfect overall 5-star rating. ReceiptMate also rated webdew a perfect 5 as webdew delivered the video with utmost quality, meeting the deadlines.

ReceiptMate’s excitement can be understood from their statement about webdew:

“We added their output on our website and all our social media accounts!”

As the webdew team was thrilled and excited to work with ReceiptMate, You can check out the video we made for ReceiptMate here!